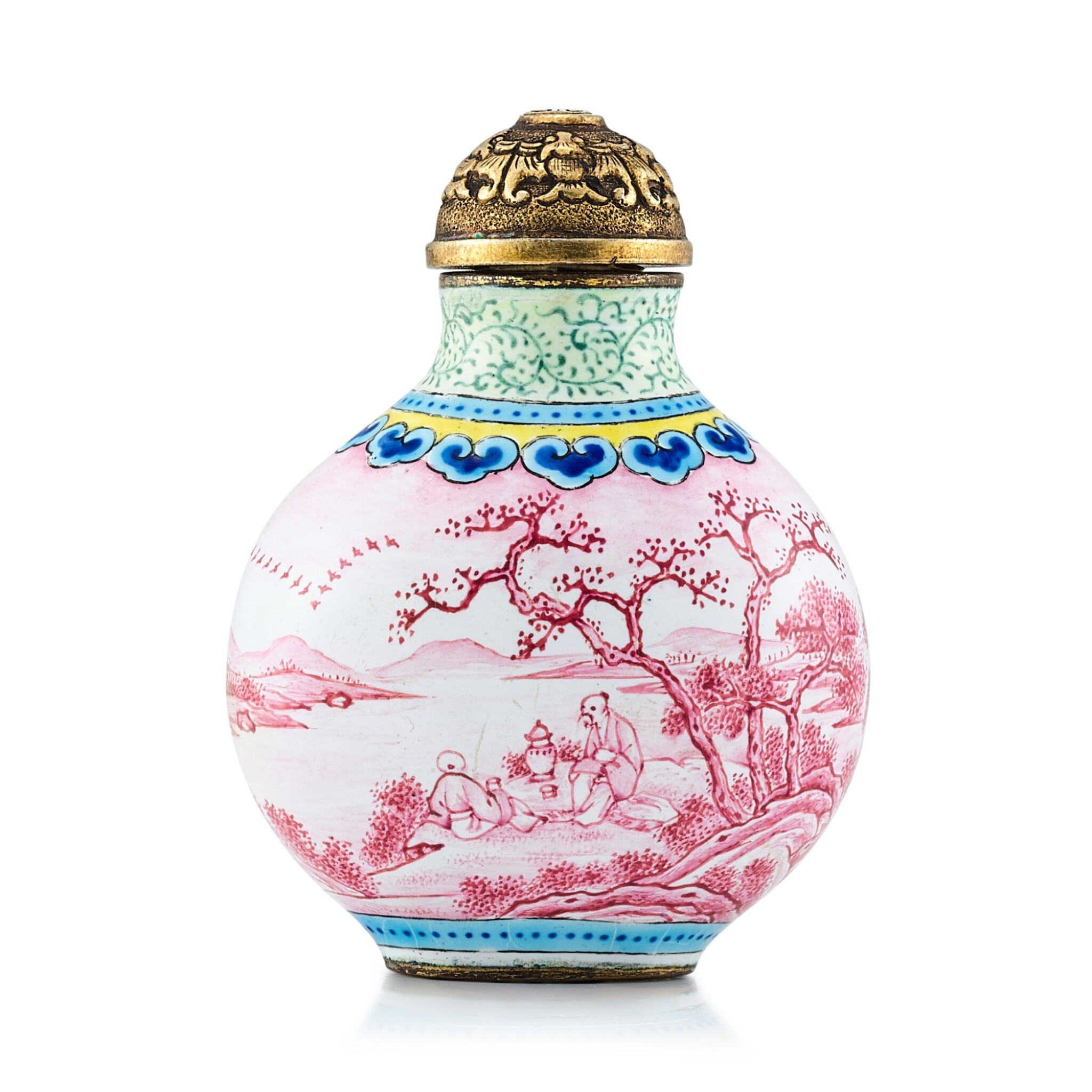 Mark and Period of Jiaqing

Three areas of repainting including part of the neck and the mountainous riverscape on the narrow side with an associated tiny enamel flake, and the mountain scene on lower left area on the other side. Other minor wear to the enamel.

Enamel snuff bottles produced within the Zaobanchu (Imperial Household Department) in the Jiaqing period and enamelled with a Jiaqing reign mark are extremely rare. Only one other example appears to be recorded, an enamel snuff bottle with similarly articulated four-character kaishu mark, decorated with foreigners bearing tributes from the Qing court collection and still in Beijing, illustrated in Snuff Bottles. The Complete Collection of Treasures of the Palace Museum, Hong Kong, 2003, pl. 177.

The exquisitely rendered puce enamel scenes on the current bottle may be attributed to the influences of European enamelled pieces which were imported to the Court, often as a tribute to the Emperor. The style of painting on the bottle is also closely related to the 18th century prints and engravings from Europe, especially in the stippling effects to produce shading and differentiation of depth and form in the landscapes. Prints of such idealised landscapes populated with small figures began to be produced in France around 1750. The use in Europe of puce as the monochrome colour against white in enamels on copper seems to have developed much later than on porcelain, often depicting chinoiserie scenes within raised gilt rococo frames. These can usually be dated to after 1750.

By the reign of the Qianlong Emperor, enamellers at the palace workshops had mastered the manufacture and painting of fine overglaze enamels. The finest quality puce enamelled landscapes were found on ceramics, glass and copper wares with Qianlong marks, and appear to have been made at the imperial ateliers during his reign. For Qianlong prototypes of the current bottle, compare an example from the Qing court collection and still in Beijing, illustrated in Snuff Bottles. The Complete Collection of Treasures of the Palace Museum, Hong Kong, 2003, pl. 174, and another sold at Christie’s Hong Kong, 25th April 2004, lot 837, from the J&J Collection.