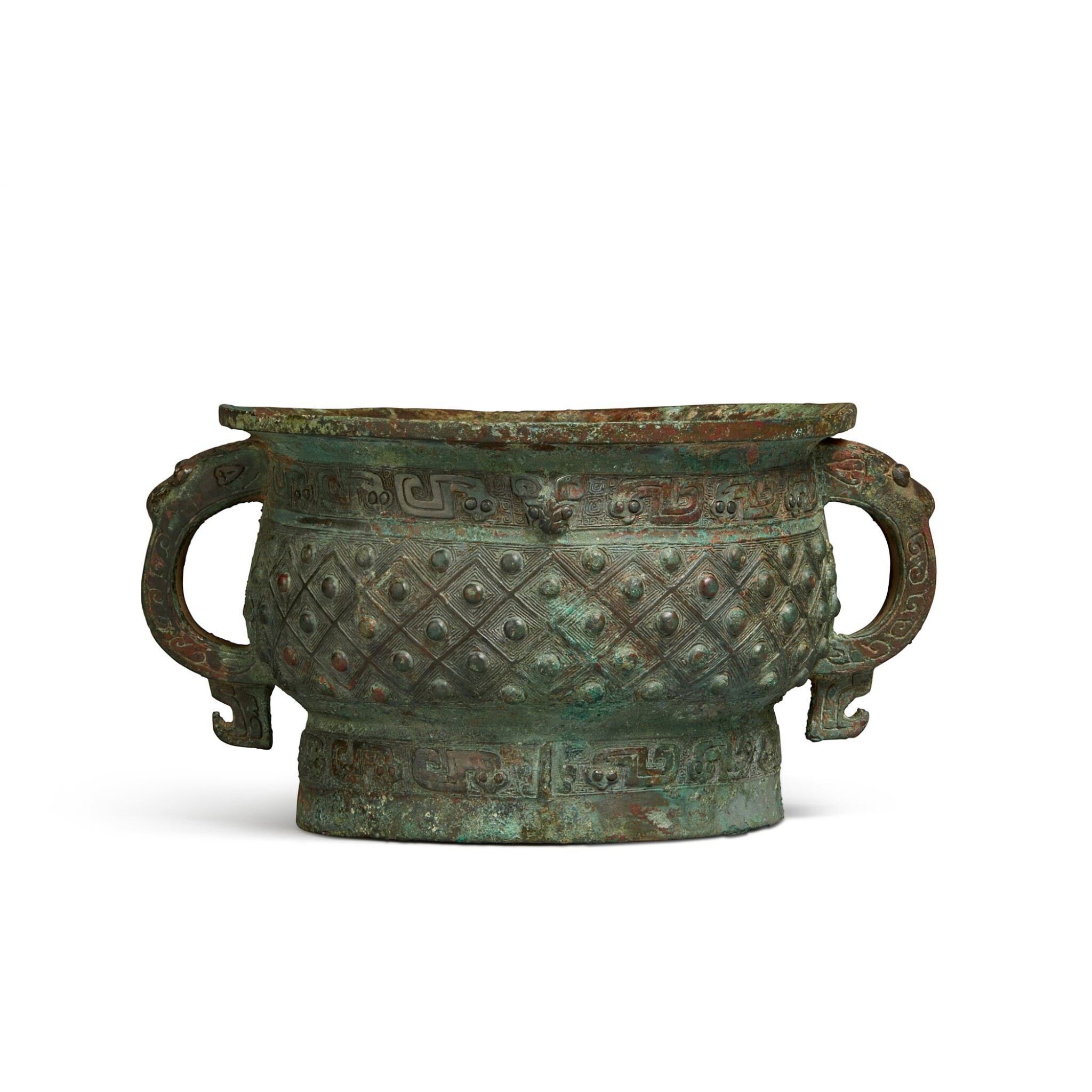 the deep rounded sides finely cast with a wide register of repeating leiwen diamond ground, each unit centered by a protruding boss, below a narrow band of serpents interrupted by mythical beast-masks in high relief and an everted rim, the body set with a pair of loop handles issuing from beast masks and with pendent hooks, the tall, slightly splayed foot with a further band of serpents, the interior cast with an inscription translating to 'Lü made this precious sacrificial vessel for Father Yi'

A section of the rim (approx. 13x4 cm) has a restored break. A few very faint cracks to the handles. Otherwise in general good condition. X-Ray available upon request.

The present gui is notable for its elaborate decoration, which combines both the 'diamond and boss' pattern and serpent motifs. While both designs were popular during the late Shang to early Western Zhou dynasty, a combination of the two is especially rare. Very few examples, which have been attributed to the early Western Zhou period, appear to be recorded. See a bronze gui raised on a square pedestal from the Palace Museum, Beijing, similarly decorated around the body with bosses on a diamond ground and bands of serpents encircling the foot and neck. The rubbing of the vessel is illustrated in Wu Zhenfeng, Shang Zhou qingtongqi mingwen ji tuxiang jicheng [Compendium of inscriptions and images of bronzes from Shang and Zhou dynasties], vol. 1, Shanghai, 2012, no. 04036. Another related example is the famous Hong gui in the Shanghai Museum, Shanghai. This remarkable vessel is supported on four legs and set with a pair of elephant handles. The body is similarly decorated with the 'diamond and boss' pattern and a narrow band of serpents around the neck; see Chen Peifen, Xia Shang Zhou qingtongqi yanjiu: Xi Zhou pian, shang [Study of archaic bronzes from Shang, Shang and Zhou dynasties: Western Zhou dynasty, vol. 1], Shanghai, 2004, pl. 231.

The first pictogram from the inscription on the present bronze identifies the owner of the vessel as Lü. An alternative interpretation of this pictogram considers it as a compound character reading Xing Lü. The history of the Lü clan can be traced to the Shang dynasty, as the same pictogram can be found on a few late Shang bronzes. See a gui from the Arthur M. Sackler Collection, now in the National Museum of Asian Art, Smithsonian Institution, Washington, D.C. (acc. no. S1987.51), published in Robert W. Bagley, Shang Ritual Bronzes in the Arthur M. Sackler Collections, Washington, D.C. and Cambridge, 1987, pl. 103; and a fangyi in the Metropolitan Museum of Art, New York (acc. no. 1985.214.2), illustrated in Wu Zhenfeng, op. cit., vol. 24, no. 13465. The presence of the Lü family continued after the Shang empire was conquered by the Zhou, as the same clan symbol appears on several early Western Zhou bronzes, including a gui excavated in Fufeng county, Shaanxi in 1984, illustrated in Liu Yu and Lu Yan, eds, Jinchu Yin Zhou jinwen jilu [Compilation of recently discovered bronze inscriptions], vol. 2, Beijing, 2002, pl. 409; a you with an elongated body from the Pillsbury Collection, now in the Minneapolis Institute of Art, Minneapolis (acc. no. 50.46.97a,b), published in The Institute of Archaeology, Chinese Academy of Social Sciences, Yinzhou jinwen jicheng [Compendium of Yin and Zhou bronze inscriptions], Beijing, 2007, no. 05090; and another you formerly in the C.T. Loo Collection, published in Wu Zhenfeng, op. cit., vol. 23, no. 12845.