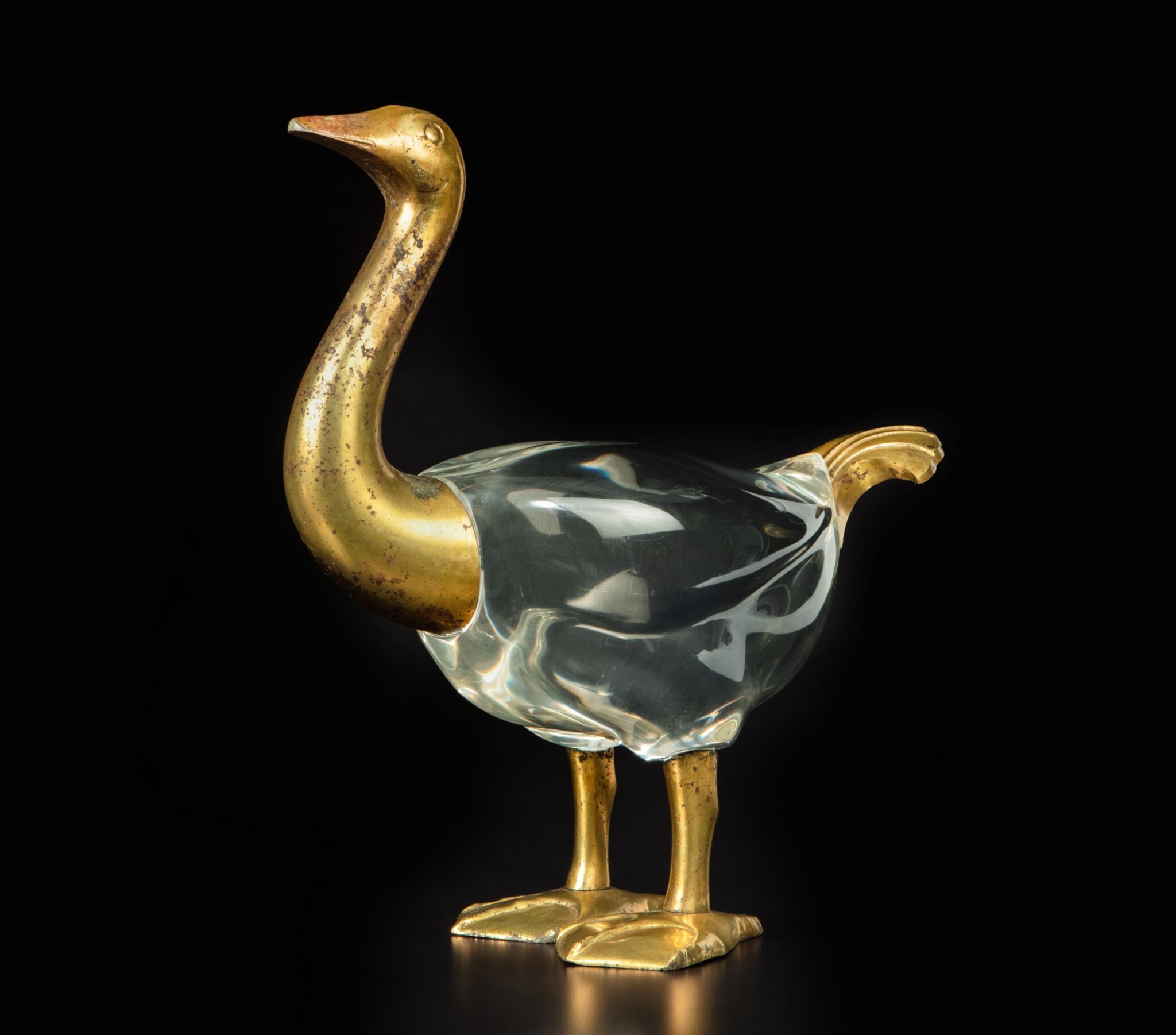 A rare and large fragmentary gilt-bronze figure of a goose

comprising four finely cast gilt-bronze components and a later-added Perspex body, the bird with elongated S-curved neck and an elegantly tapering beak, the eyes indicated by a pair of recessed circles, all supported on a pair of sturdy webbed feet, with an upturned tail fanned out (5)

There is a hairline crack approx. 11.3 cm long to one side of the cheek. Overall in good condition with expected wear, including some minor chips consistent with age.

The present figure is notable for its fine casting, superb gilding, and large size. Geese are symbols of loyalty and discipline, and goose-form lamps and vessels were especially popular during the Han dynasty.

Compare a goose-form zun in the collection of the Brooklyn Museum, New York, with similarly cast tail and feet but with a downturned neck and stylized face, illustrated in Christian Deydier, Chinese Bronzes, New York, 1980, pl. 79. A goose-form censer with a pierced cover was excavated from Sanzhaocun, Yanta District, Xi'an, exhibited in Everlasting Like the Heavens: The Cultures and Art of the Zhou, Qin, Han, and Tang, Tsinghua University Art Museum, Beijing, 2019, p. 333. An example of this type of censer was sold at Christie's London, 15th May 2014, lot 1049. For a more elaborate lamp in the form of a goose eating a fish, see an example in the National Museum of China, Beijing, illustrated in Compendium of Chinese Art Bronzes, Taipei, 1993, pl. 1151. Compare also other smaller bird-form vessels, such as a pair of lamp supports, included in A Selection from the Exhibition of Archaeological Finds of the People’s Republic of China, Beijing, 1973, pl. 235, or a single standing figure of a bird, exhibited in Archaeological Treasures Excavated in the People’s Republic of China, Tokyo National Museum, Tokyo, 1973, cat. no. 80.

For other freestanding figures of animals of comparable size, refer to a gilt-bronze mythical beast sold in our London rooms, 16th June 1998, lot 4, and a bronze ox in the Meiyintang Collection, illustrated in Wang Tao, Chinese Bronzes from the Meiyintang Collection, London, 2009, pl. 152. Han period pottery figures of ducks or geese also survive; compare one similarly modeled to the present, sold in our London rooms, 10th December 1984, lot 537.

For Qin-era precursors to Han dynasty bronze figures of geese, refer to the 46 life-size bronze waterfowl excavated from Pit K0007 of the Qin Mausoleum, Shaanxi province.