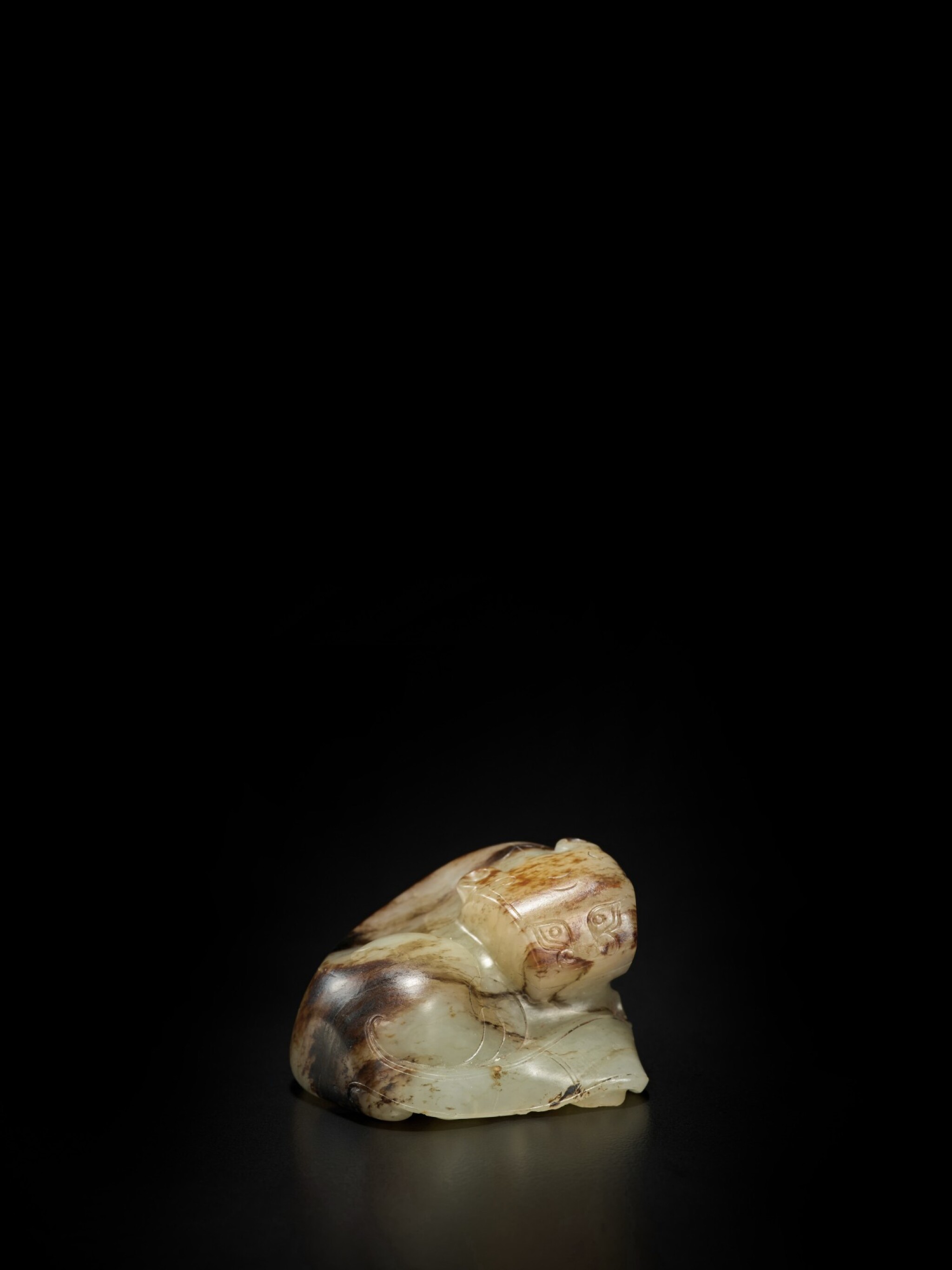 A pale green and brown jade figure of a tiger

carved in the round, the coiled recumbent feline with legs tucked underneath, the head lowered resting on the front paws, the long tail curled around the body and nestled between the head and paws, the face with squared eyes above a ruyi-form nose and straight mouth indicated by a single incised line, the small circular ears relaxed, the body with a neatly defined spine and sparsely detailed with incised lines, the stone a greenish-beige color with russet and brown inclusions

There is a small shallow chip to the front right claw and a few small chips along the edges of the tail. Otherwise, the carving is in overall good condition with expected natural fissures to the stone. The actual color is less green compared to the catalogue illustration.

The pictorial tradition of depicting tigers in Chinese art has been traced back to circa 4000 BC, when profile images of the a tiger and dragon were placed on either side of a human skeleton at a burial site at Xishuipo, Puyang, Henan province. Later, the tiger would be included as one of the four directional animals, sishen, representing the west.

The present lot is inspired by jade tigers from the Han dynasty which are typically carved in coiled recumbent or seated positions, following the form of the pebble, and carved with squared eyes, sparsely incised details and a flattened base. Compare one, with the head raised, in the collection of Brian McElney, included in the exhibition Chinese Jades from Han to Ch'ing, Asia House Gallery, New York, 1980, cat. no. 9; one with the mouth agape, illustrated in Alfred Salmony, Archaic Chinese Jades from the Edward and Louise B. Sonnenschein Collection, Chicago, 1952, pl. CVI, fig. 1; another in the Qing Court Collection, illustrated in The Complete Collection of Treasures of the Palace Museum, Jadeware (I), Hong Kong, 1995, pl. 199; and two included in the exhibition Chinese Jade Animals, Hong Kong Museum of Art, Hong Kong, 1996, cat. nos 45-46. Another, formerly in the collection of Jon Edwards, was sold at Christie's New York, 2nd December 1989, lot. 185.

Such jade carvings also relate to cast bronze forms of the Han dynasty, including a number of gilt-bronze and inlaid-bronze mat weights. Compare a single tiger-form gilt-bronze mat weight from the Alsdorf Collection, included in the exhibition Arts of the Han Dynasty, Chinese Art Society of America, New York, 1961, cat. no. 58; and a similar pair included in the exhibition A Bronze Menagerie: Mat Weights of Early China, Isabella Stewart Gardner Museum, Boston, 2007, cat. no. 1.