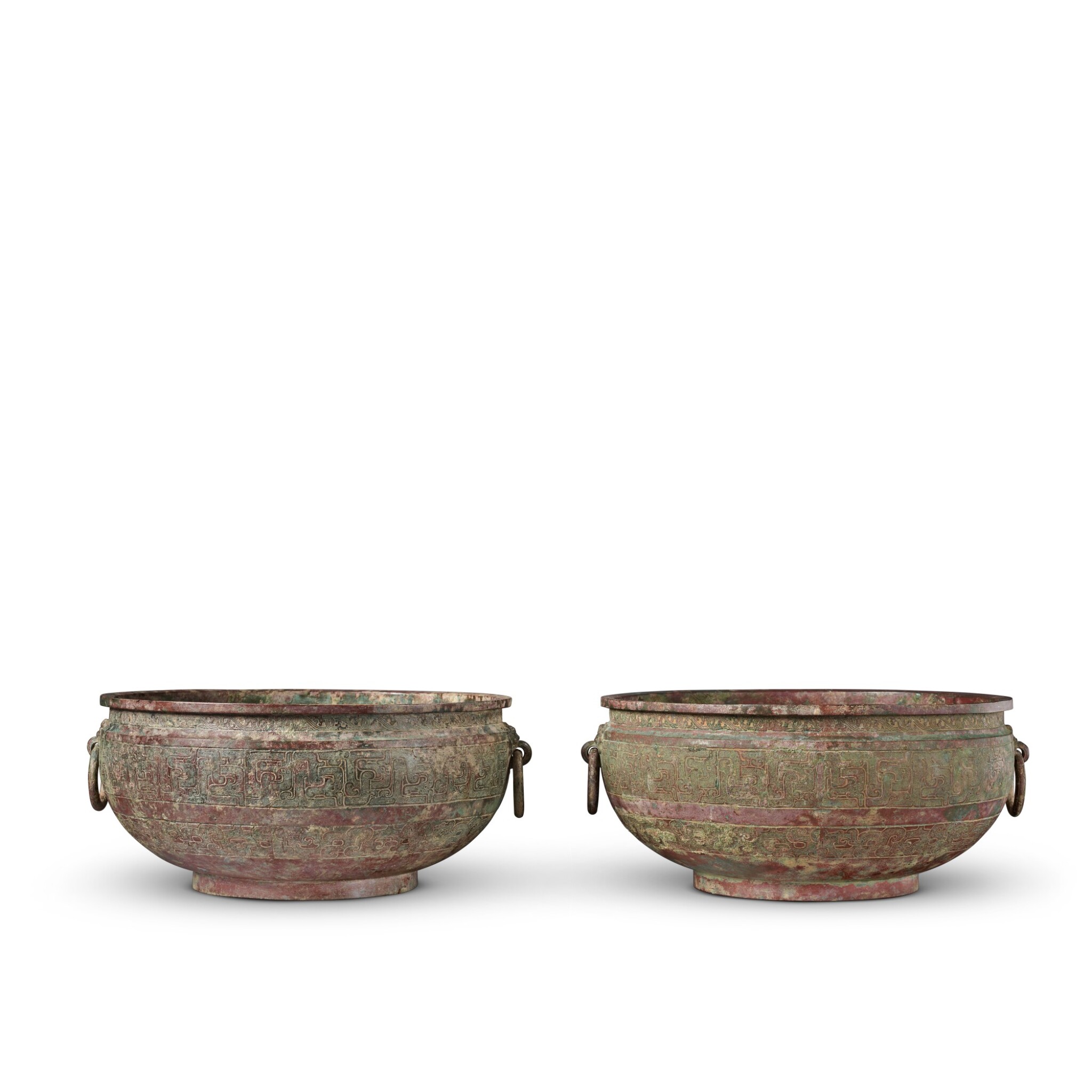 Both are in overall good condition with expected wear, including some short scratches to the base of one. X-Ray available upon request.

In response to your inquiry, we are pleased to provide you with a general report of the condition of the property described above. Since we are not professional conservators or restorers, we urge you to consult with a restorer or conservator of your choice who will be better able to provide a detailed, professional report. Prospective buyers should inspect each lot to satisfy themselves as to condition and must understand that any statement made by Sotheby's is merely a subjective qualified opinion. NOTWITHSTANDING THIS REPORT OR ANY DISCUSSIONS CONCERNING CONDITION OF A LOT, ALL LOTS ARE OFFERED AND SOLD "AS IS" IN ACCORDANCE WITH THE CONDITIONS OF SALE PRINTED IN THE CATALOGUE.

The present pair of jian belong to a group of vessels produced around the end of the Spring and Autumn period at Liyu, Shanxi province. The group first became known through a 1923 excavation from which twenty-eight vessels were published in Umehara Sueji, Sengoku-shiki doki no kenkyu [Research on Warring States bronzes], Kyoto, 1936. The characteristics of the 'Liyu' style were later closely analyzed by George W. Weber in The Ornaments of Late Chou Bronzes: A Method of Analysis, New Brunswick, 1973, pp 369-538, 557-562. In his typology of Liyu bronzes, Weber identified the interlocking dragon band found on the present jian as a defining characteristic of Group E vessels with zoomorphic motifs, and noted that Group E vessels are among the most typical of Liyu production around the first quarter of the 5th century BC (ibid., pp 369-375). The band can be recognized by its repeating units of two intertwined serpentine dragons, one with the bifurcated tail forming the upper border of the band and its sinuous body descending and forming a hook within the unit, its mate taking the opposite form from the lower border of the band, and the bodies of the two interlacing within the unit. The bodies of the dragons are patterned with modified leiwen spirals.

Other bronze vessels belonging to this group and bearing interlocking dragon bands of the same design include a jian from the Lucy Maud Buckingham Collection and now in the collection of the Art Institute of Chicago (coll. no. 1930.704), published in Charles Fabens Kelley and Ch'en Meng-Chia, Chinese Bronzes from the Buckingham Collection, Chicago, 1946, pl. LI. A number of ding and covers bearing this distinctive band design also survive, include one formerly in the collections of David David-Weill and Arthur M. Sackler and published in Jenny So, Eastern Zhou Ritual Bronzes from the Arthur M. Sackler Collections, vol. III, New York, 1995, no. 16; one excavated from Tomb 251, Jinshengcun, Taiyuan, Shanxi province (ibid., fig. 16.1); one in the National Museum of Asian Art, Smithsonian Institution, Washington, D.C. (acc. no. F1947.20a-b); and another in the Shanghai Museum, Shanghai, exhibited in Treasures from the Shanghai Museum: 6000 Years of Chinese Art, Asian Art Museum, San Francisco, 1983, cat. no. 42. See also a dun and cover formerly in the Madame L. Wannieck Collection and now in the National Museum of Asian Art, Washington, D.C. (acc. no. F1932.13a-b).