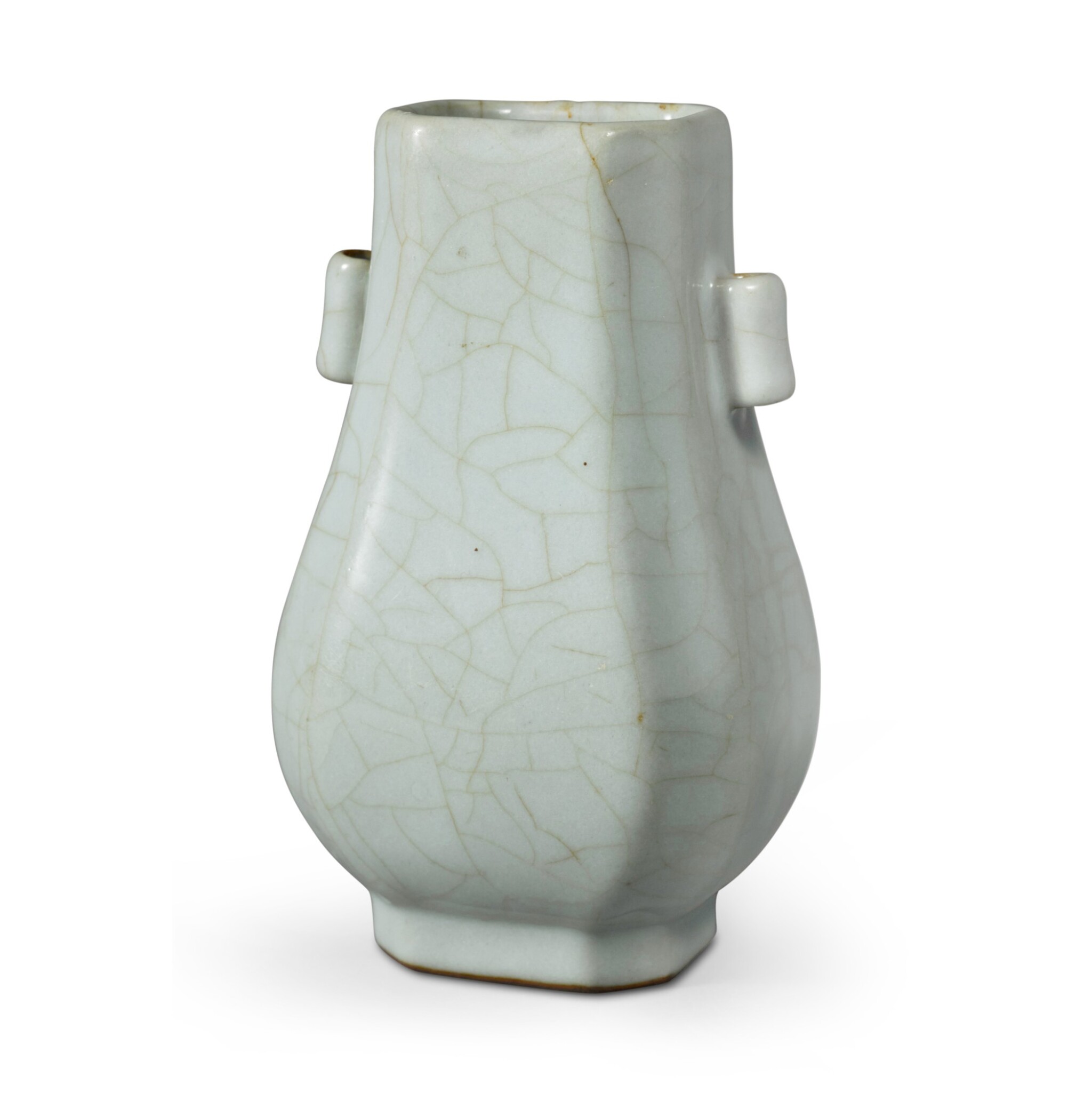 the pear-shaped body of quadrangular section with canted corners, all supported on a straight foot and gently tapering at the neck set with a pair of lug handles, covered overall in a creamy caesious-colored glaze suffused with fine golden craquelure, the base with a six-character seal mark in underglaze blue

The present vessel evokes multiple layers of classicism, a prevalent theme in Qing dynasty craftsmanship. On the one hand, its form derives from archaic Shang and Zhou dynasty bronze vessels. On the other hand, its unctuous caesious-colored glaze suffused with fine craquelure evokes Song dynasty Guan wares, which in turn also imitated the ancient ritual vessels. Compare the present vase with a Southern Song dynasty precursor (acc. no. 故-瓷-014022-N000000000), which was inscribed on its base with a poem by the Qianlong Emperor extolling the wonders of Guan ware and the guaner form, in the collection of the National Palace Museum, Taipei, exhibited De jia qu: Qianlong huang di de tao ci pin wei / Obtaining refined enjoyment: the Qianlong Emperor's taste in ceramics, National Palace Museum, Taipei, 2012, cat. no. 28. This vase attests to the Emperor's pursuit of Song aesthetics as well as the imperial ceramicists' ingenuity in creating new porcelains that drew upon historical precedents while meeting the Emperor's exacting standards.

A similar vase in the collection of the National Palace Museum, Taipei is published in the Illustrated Catalogue of the Ch'ing Dynasty Porcelain in the National Palace Museum Ch'ien-lung Ware and Other Wares, Tokyo, 1981, pl. 82; one from the Art Gallery of the Chinese University of Hong Kong was included in the exhibition Qing Imperial Porcelain of the Kangxi, Yongzheng and Qianlong Reigns, Hong Kong, 1995, cat. no. 63; and two vases of this type, one with a crackled glaze and the other with a plain Guan-type glaze, are published in Regina Krahl, Chinese Ceramics from the Meiyintang Collection, vol. II, London, 1994, pls 874 and 875. Two further vases of this type are illustrated in Qing Imperial Monochromes: The Zande Lou Collection, Hong Kong, 2005, pl. 32; another is illustrated by John Ayers in The Baur Collection, vol. III, Geneva, 1972, no. A344; and an example from the Garner Collection was included in the Oriental Ceramic Society exhibition The Arts of the Ch'ing Dynasty, London, 1964, cat. no. 276. See also another from the Edward T. Chow Collection sold in our Hong Kong rooms, 25th November 1980, lot 91 and on 19th May 1981, lot 501; a similar vase that sold twice in our Hong Kong rooms, first on 20th November 1985, lot 203, and then again on 6th April 2016, lot 3638; and one from the estate of William and Jennifer Shaw sold in these rooms, 11th-12th September 2012, lot 54, which was previously sold in our Hong Kong rooms, 20th-21st May 1987, lot 511.