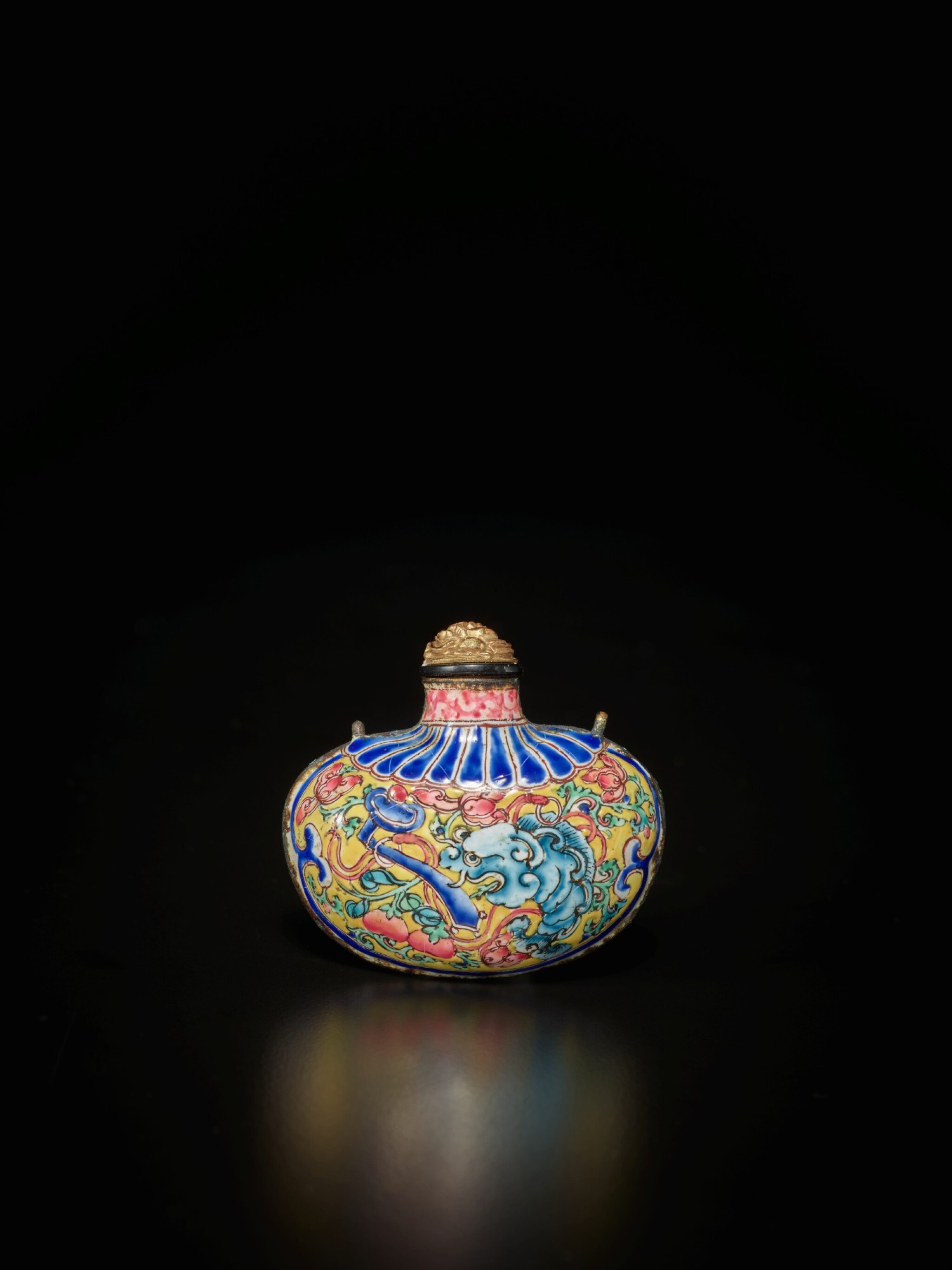 of oblong form comprised of two hammered copper alloy halves joined along a raised seam, each side richly painted with a turquoise fish-dragon pursuing a beribboned ruyi scepter amidst scrolling auspicious flowers and fruits all against a yellow ground, all beneath blue petal lappets at the shoulder and a pink scrollwork band at the neck, two loop handles at the shoulder, stopper (2)

The metal oxidized and causing tiny patches of discoloration to the areas immediately along the seam and rim. Otherwise, in generally good condition.

Beginning in the late Kangxi period, and continuing through the first half of the Qianlong period, workshops in Guangzhou produced enameled metal snuff bottles in the forms of purses and pouches. The earlier examples, such as the present lot, tend to feature a metal ridge dividing the two broad halves of the bottle, and a pair of parallel upright handles at shoulder. These characteristics also appear on a Kangxi/Yongzheng period bottle painted with a black 'floral brocade' motif against a magenta ground from the Mary and George Bloch Collection, published in Hugh Moss, Victor Graham and Ka Bo Tsang, A Treasury of Chinese Snuff Bottles: The Mary and George Bloch Collection, vol. 6, pt. 1, Hong Kong, 2007, no. 1127, and sold in our Hong Kong rooms, 24th November 2014, lot 98. A similar Yongzheng/Qianlong period snuff bottle with upright handles but lacking the raised ridge, painted in vibrant polychrome enamels with confronting phoenix against a lavender ground, and also from the Bloch Collection was published in ibid., no. 1128, and sold in the same Hong Kong auction, lot 133; a related Yongzheng period example painted with the Virgin Mary and an angel, sold in these rooms, 23rd-24th March 1998, lot 286; one painted with a composite floral scroll against a lime-green ground and attributed to the Qianlong period sold in our Hong Kong rooms, 7th April 2015, lot 3113; and another with composite floral scroll against a yellow ground is in the collection of the Palace Museum, Beijing (coll. no. 故00118327). See also a similarly shaped bottle but lacking the ridge and the handles, and painted with pink confronting fish-dragons against a black ground, attributed to 1720-1740, exhibited in Treasures from the Sanctum of Enlightened Respect: Chinese Snuff Bottles from the Collection of Denis Low, Asian Civilisations Museum, Singapore, 1999, cat. no. 8.