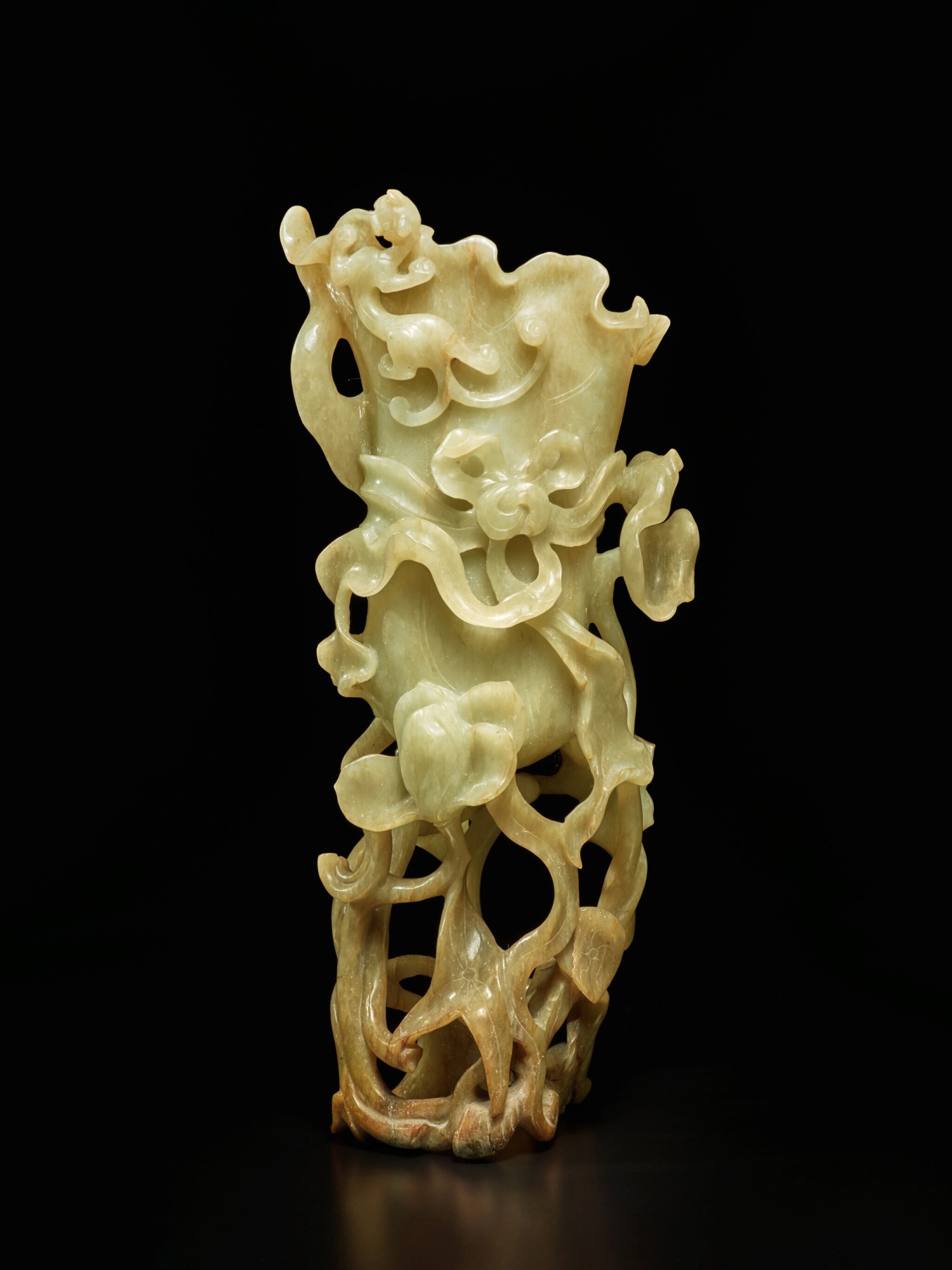 naturalistically carved in the form of a furled upright lotus leaf with fluttering edges, encircled at the middle with a ribbon tied in a bow, two chilong scaling its sides, all supported below by a tangle of curling stems forming the integral openwork base, burgeoning lotus blossoms and smaller leaves issuing from the stems, the beige stone gradating to a russet tone near the base, wood stand (2)

The rim with a section chipped off and polished. A small chip to the rim of a downright lotus leaf near the base. Overall with scattered minute nicks to the extremities. The stone with natural fissures.

The form of the vase is called huacha (flower vase). This type of jade carving can be traced back to the Ming dynasty and was commonly used in the Qing Court for display and flower arrangements. While Ming dynasty examples are cylindrical, Qing huacha are of various naturalistic shapes, such as 'Buddha's hand citron', cabbage, double-fish, and lingzhi, among others. Lotus were one of the favorite subject matters of the Imperial Palace Workshop (Zaobanchu).

Compare a closely related vase with an elongated body attributed to the Qing dynasty in the collection of the Capital Museum, Beijing, illustrated in Gu Fang. ed., Zhongguo chu tu yu qi quan ji / The Complete Collection of Jades Unearthed in China, Beijing, 2005, vol. 1, p. 89. Another shorter related example attributed to the Qianlong period is included in S. Howard Hansford, Chinese Carved Jades, London, 1968, pl. 90. See another vase of the same type, in the form of a magnolia with lingzhi, published in J. J. Schedel, The Splendor of Jade, New York, 1974, pl. 54. A similar vase of lingzhi design, attributed to the Ming dynasty, is also published in Yang Boda, Zhongguo yu qi quan ji / The Complete Compilation of Chinese Jades, Shijiazhuang, 2005, pl. 305.

For examples sold at auction, compare two related examples of shorter design, one sold at Christie's Hong Kong, 31st October 2004, lot 1031; the other sold at Christie's London, 5th November 2012, lot 26. Another vase designed as a furled upright lotus leaf without the foliage base, sold in our Hong Kong rooms, 1st December 2016, lot 17.