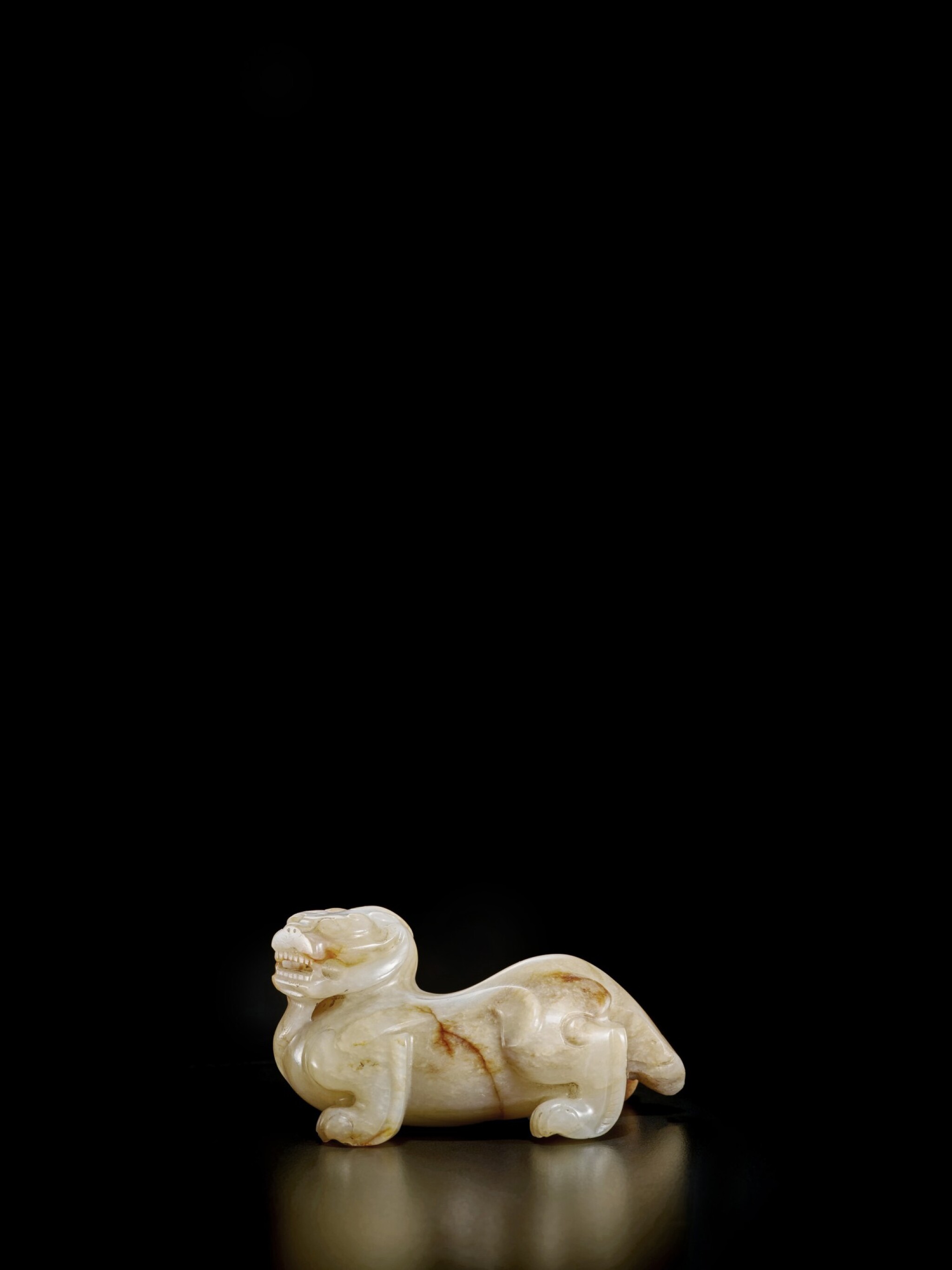 A beige and russet jade bixie

prowling with the body lowered and turned slightly to the right, the right foreleg drawn back and the other three legs pushing the body forward, the spine and muscular torso twisting in concert with the movement, the contours mimicked by the wings issuing from the shoulders and laying flat against the back, the ferocity of the beast conveyed through the protruding chest with the head held high above and glaring over the left shoulder, the mouth open bearing the teeth and fangs, the bulging eyes alert beneath a furrowed brow, the mane swept back and the tuft of fur from the chin brushing against the chest, the stone a beige color with russet inclusions

The tail is partially missing. A few small chips to the front-left foot and back-right foot. Overall with minute nicks to the extremities.

Moving away from the highly stylized depictions of animals in the Shang and Zhou dynasties, artisans of the Han dynasty and Six Dynasties developed a more naturalistic approach to representing animals. This aesthetic was applied to images of both real and mythical creatures, and across artistic mediums. At the same time, lapidary arts flourished, and jade animals of unprecedentedly high quality started to be carved. The present bixie is a superb example of the sculptural practices of the period, and the era's enthusiasm for miraculous creatures that were believed to be portents possessing supernatural power.

A number of similar jade bixie attributed to the Han dynasty are known. Compare one exhibited in Chinese Jades from Han to Ch’ing, Asia House Gallery, Asia Society, New York, 1980, cat. no. 11. A similar jade bixie, also poised in a crouching prowl and with the face turned to the side, sold in these rooms, 2nd November 1979, lot 51, and was subsequently illustrated in Jessica Rawson, Chinese Jade–From the Neolithic to the Qing, London, 1995, pl. 26:7. A third related example is in the National Museum of Asian Art, Smithsonian Institution, Washington, D.C. (coll. no. S1987.797), was included in the exhibition 5000 Years of Chinese Jade: Featuring Selections from the National Museum of History, Taiwan and the Arthur M. Sackler Gallery, Smithsonian Institution, San Antonio Museum of Art, San Antonio, 2011, cat. no. 47. A jade beast of this type with an elongated body from the Qing Court Collection, is published in The Complete Collection of Treasures of the Palace Museum: Jadeware I, Hong Kong, 1995, pl. 201.

Close comparisons can also be drawn between the present carving and three jade bixie that have been attributed to the Six Dynasties. The first, from the collection of Dr. and Mrs. Cheng Te-k'un, was exhibited in Watt, op. cit., cat. no. 12; the second, from the collection of Robert Youngman, sold in our Hong Kong rooms, 3th April 2019, lot 3405; and the third sold at Christie’s Hong Kong, 30th May 2017, lot 2743.

Liang Dunyan (1857–1924) was a native of Guangdong province, who was partially educated in the United States through his participation in the Chinese Educational Mission. The Mission, which operated from 1872 to 1881, sent 120 Chinese youths to live with American families and study in New England secondary schools, and subsequently study in American universities, with the aim that graduates would return to China and contribute to China's modernization and ‘Self-Strengthening’ efforts. As part of that pioneering program, Liang entered Hartford Public High School in Connecticut in 1874 and went on to graduate from Yale University (class of 1882). Following his return to China, Liang served in numerous important roles as a politician, diplomat, and advocate for education starting in the late Qing dynasty. Among his distinguished positions were his tenure as President of Beiyang University in Tianjin (1904-07), China’s Minister to the U.S.(stationed in Washington, D.C.) (1907), and the President of the Board of Foreign Affairs (1908-11). His prime accomplishment was negotiating with the U.S. Minister to China, William Rockhill, in 1908-09, to finalize the U.S.-Sino scheme to utilize the excess Boxer Indemnity funds in the creation of a Boxer Indemnity Scholarship. Since 1909, the Scholarship has sponsored thousands of Chinese students to study in U.S. preparatory schools and universities. During the Republic period, Liang served as the Minister of Communications (1914-16) and as the Minister of Foreign Affairs (1917).