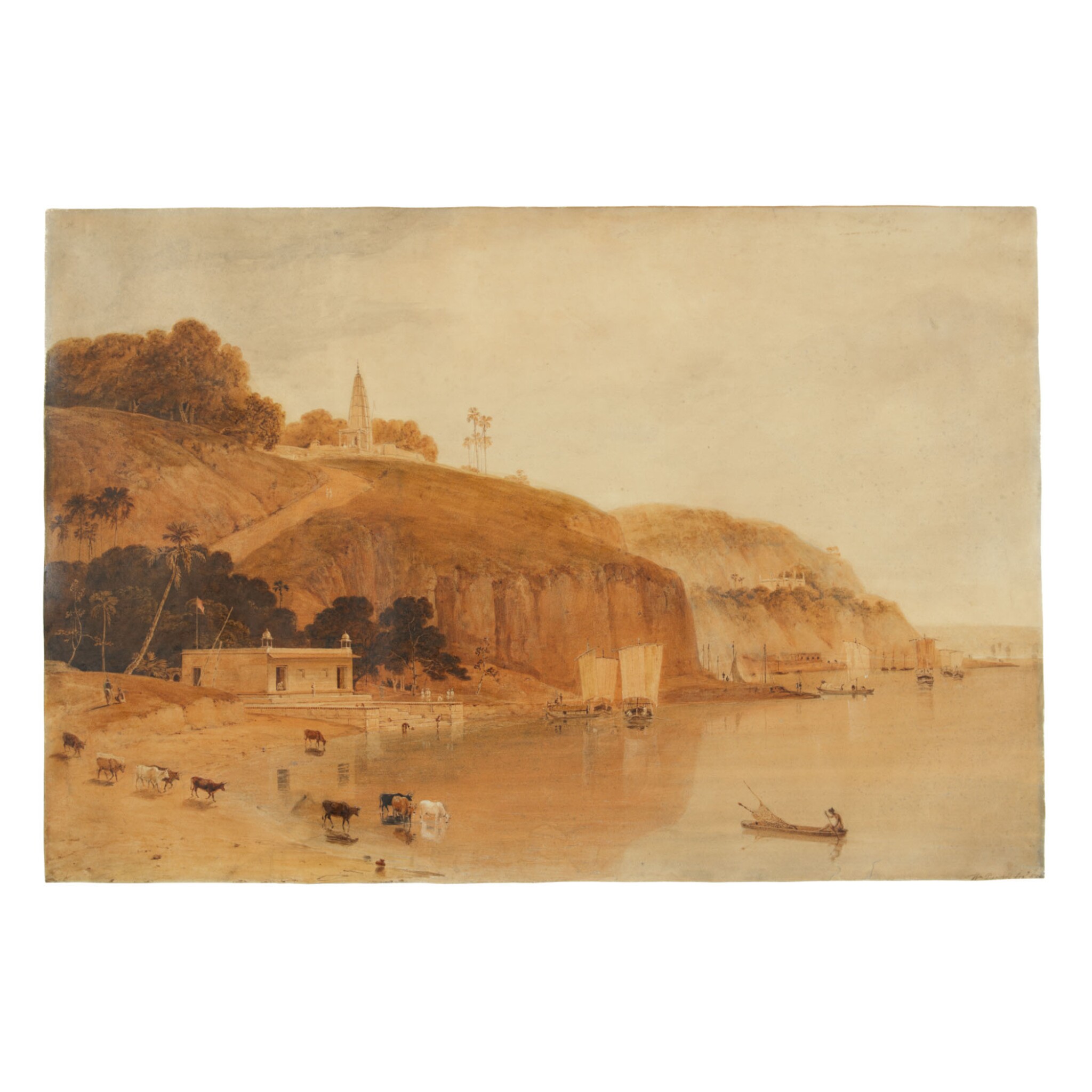 VIEW OF THE RIGHT BANK OF THE RIVER GANGES, NEAR CURRAH, DECEMBER 1788

The large watercolor picturing a serene riverbank with a group of cows ambling down to the water’s edge in the company of bathers at a nearby ghat. Sailboats hug the winding riverbank while a fisherman paddles nearby. Beyond a copse of trees behind the ghat is a winding road leading up to a temple on the bluffs above. The scene is set on the banks of the Ganges near the Fort of Kara (Currah).

This marvelous watercolor by the English artist William Daniell, was painted during his trip to India in the years 1786-94 accompanied by his uncle and collaborator Thomas Daniell (1749-1840) who was a member of the Royal Academy. Notable was their celebrated series of 144 aquatints "Oriental Scenery" published in six parts in London from 1795 to 1807, which was based upon their depictions of picturesque Indian landscape views executed in watercolor and pencil sketches. William Daniell was elected a full member of the Royal Academy on February 9, 1822.

The two artists often took notes of their observations and recorded these in their diaries. Regarding Currah, Daniell noted, "The banks of the Ganges are here very lofty, steep, and picturesque; but are subject to considerable alterations in the rainy season, as the river then rises to the height of thirty feet.”

Mildred Archer mentions that, "Kara was a sacred place in early Hindu days. It was conquered by the Muslims in 1194 and became a seat of government until the present fort and city of Allahabad were built by Akbar in 1583 as the new administrative centre. Ruins of the old city extended along the river bank for 2 miles." (M. Archer, Early Views of India, London 1980, no. 26)

Very relatable scenes in aquatint were published by the Daniells as follows: "Near the Fort of Currah on the River Ganges," Plate 18 (dated 1801) and Plate 21 (dated 1796) from "Oriental Scenery. Twenty Four Views In Hindoostan" By William and Thomas Daniell (Royal Academy 18/2381).

An oil painting of a related scene by William Daniell was sold at Christie’s London, September 27, 2001, lot 10, signed and inscribed with an old label on the verso: "Near Curah Manickpore on the Ganges - with native females carrying away the water from the sacred stream - W. Daniell R.A." Pencil and watercolor sketches of Currah were featured in the same sale as Lots 3 and 4.

The present large watercolor is one of the finest and most atmospheric of Daniell's renderings to appear at auction. For further reference on scenes from India painted by Thomas and William Daniell, see B. N. Goswamy, Daniells’ India: Views from the Eighteenth Century, New Delhi, 2013.