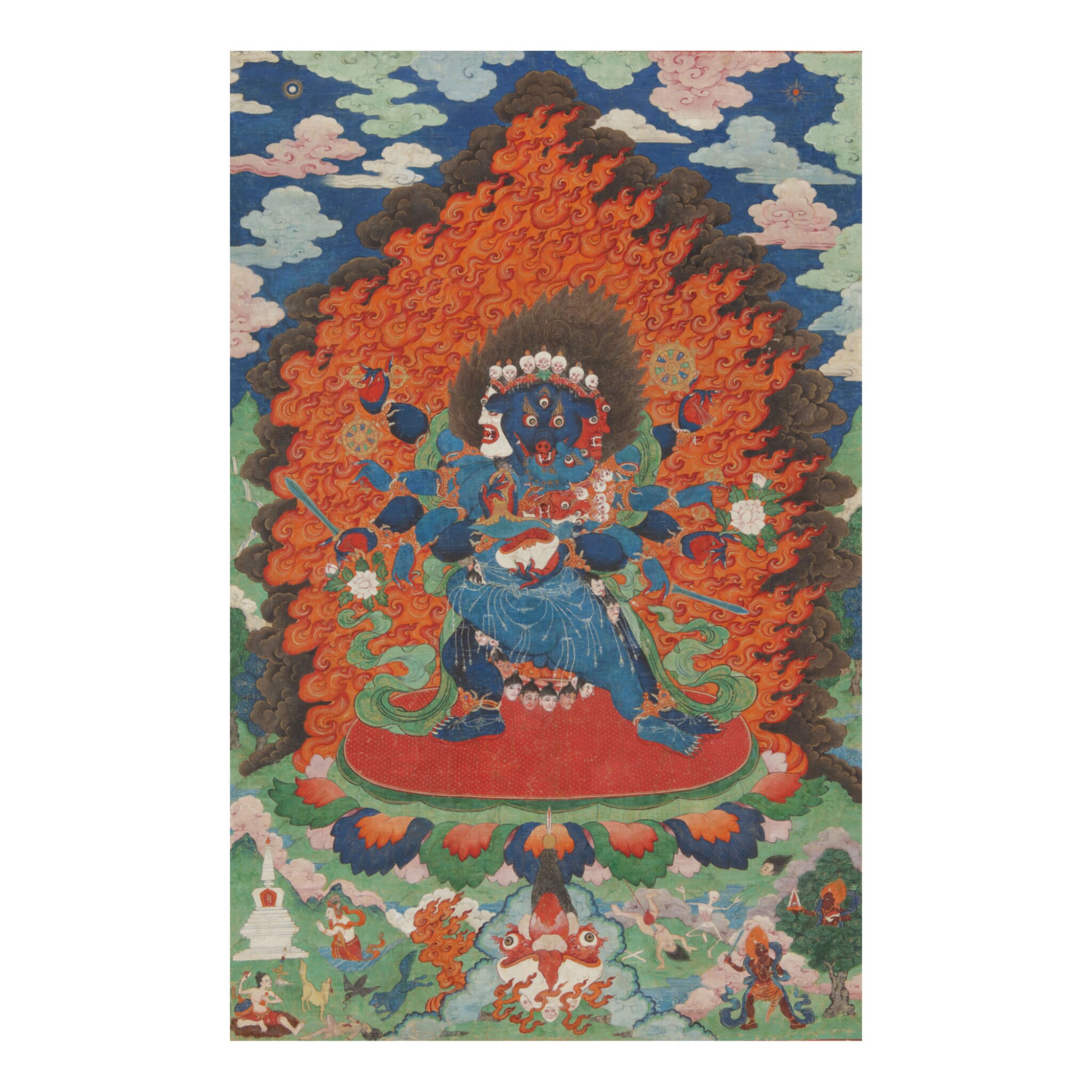 THE GODDESS CARCIKĀ AND CONSORT

the sow-headed goddess in union with her male consort, dark and light blue in color and each with secondary red and white faces, and each with six arms holding identical ritual implements, padma, khadga, vajra, chakra, kartrika and kapala, standing on a lotus pedestal with red and orange flames and black smoke rising behind, set in a mountainous landscape with a midnight blue sky, multi-colored clouds and the sun and moon above, a nagini worshiping at a white stupa below left, a mahasiddha practicing in charnel grounds with animals and a bird devouring a corpse, a large kapala at center filled with offerings, and a dancing skeleton, body parts, a slain corpse, and wrathful deities to the lower right

The dark blue animal-headed goddess lunges in pratyalidha facing the viewer in yum yab (Mother Father), engaged with her light blue male consort in a rare reversal of the common yab yum (Father Mother) tantric posture. The goddess takes the primary role in the union with her male consort. A Qianlong (r. 1735-1796) mark and period bronze group of the same iconography as the painting is displayed in the Fanhua Pavilion in the Forbidden City, and identified in a Chinese inscription as za lie zi fo mu, Skt. Carcikā: the bronze is located in shrine 21 on the fourth row of the cabinet on the East wall of the second floor, see Fanhua Pavilion, The Forbidden City Publishing House, Beijing, 2009, p. 451, cat. no. 386. Carcikā is named as one of the sixty-four yogini in early Indian tantric literature, see István Keul, ed., Yoginī in South Asia, London and New York, 2013, p. 63. The Carcikā thangka is iconographically identical to the Qianlong bronze group in the Fanhua Pavilion, and stylistically similar to Qianlong period paintings throughout the Forbidden City, in particular those in the Pavilion of Raining Flowers, the Yuhuage. A hanging consisting of nine separate paintings framed within a large silk brocade multi-window mount is suspended along the length of the North wall of the first floor of the Yuhuage, see The Palace Museum, Cultural Relics of Tibetan Buddhism Collected in the Qing Palace, Forbidden City Press, Beijing, 1992, p. 143, pl. 106. Striking similarities between these paintings and the Carcikā thangka include the palette; the cloud design above and the landscape below; the elongated format; and the focus on a large central figure with no accompanying primary deities or teachers. Individual thangka paintings in the Palace Collections typically portray the principal deity together with iconographically related deities, protectors, teachers and religious hierarchs. The solitary deity format of the Carcikā thangka may thus indicate that it was done for a group of paintings mounted together as one hanging, in the manner of the Yuhuage example. The Yuhuage was built under the supervision of the Qianlong imperial preceptor Rolpai Dorje (1717-1786), who devised the complex iconographic program of the pavilion, see Patricia Berger, Empire of Emptiness: Buddhist Art and Political Authority in Qing China, Honolulu, 2003, pp. 97-104. Close stylistic similarities between the Carcikā thangka and the paintings in the Yuhuage — constructed between 1750 and ca. 1776 — suggests that the painting is an imperial commission dating to the second half of the eighteenth century, and made under the supervision of Rolpai Dorje, the master of esoteric Buddhist iconography.