Thomas Heatherwick's Eye-Catching New Structure Is a Vessel for Change

By Tom Morris
Thomas Heatherwick’s latest structure – an ascendable lattice of staircases in New York City – is inspired by ancient meeting places to bring people together.

T homas Heatherwick wanted to “lift people up” – both literally and metaphorically. The London-based designer is just weeks away from the completion of Vessel, a 150-ft-high structure he has designed to sit amid one of New York’s largest development projects, Hudson Yards. It rises 16-storeys high and consists of 154 sets of staircases that zigzag up and down in a honeycomb-style network. Eighty separate landings connect them, which will be used for moments of reflection, viewpoints of the city and spontaneous performances. Part-jungle gym, part-sculpture, the project is being billed as a one-mile vertical “climbing experience”. But, to Heatherwick, currently reflecting on the project from his London studio, it is so much more. Vessel promises to offer those that climb its 2,464 steps a sense of togetherness.

Thomas Heatherwick’s Futuristic “Vessel” in the Heart of Hudson Yards

When Related Companies and Oxford Properties Group, the Hudson Yards developers, recruited Heatherwick to come on board five years ago, the architect was aware that the project was “possibly the largest property development in US history”. “So we asked ourselves – how do you define that and help connect with people?” Heatherwick says.

Located north of Chelsea, on Manhattan’s west side, Hudson Yards sits on top of a 26-acre platform that has been built over the train storage depot West Side Yard. It consists of 18 million sq ft of residential, commercial and retail buildings. They offered Heatherwick a huge space in the centre of it. “It’s a similar scale to London’s Trafalgar Square, but there was no battle fought to commemorate – this was not a historic site – and so there was an opportunity for something that maybe celebrated ourselves,” he says.

The studio first looked to the ancient stepwells of Rajasthan for inspiration. Made up of dozens of staircases leading down to a pond, they were traditionally places where entire villages would bathe, wash or simply gather to escape the midday heat. The team also looked to the amphitheatres of ancient Greece and Rome. “The social dimension to them is phenomenal: the way you can see and hear each other,” says Heatherwick.

Lastly, they looked closer to home at the profoundly popular High Line – a 1.45-mile-long linear park that snakes along an old railway spur in Manhattan. “The emotional impact of lifting a public space up, metres into the air, hit people more than anyone expected,” he reflects. “We thought, what if we could get a mile of public space, wrap it around, and lift it up 16 floors?”

And so Vessel was born. Bringing it to life, however, was not quite so straightforward. Creating a structure that could handle the extremes of New York’s climate, and finding a fabricator that could handle such complicated geometry, were the biggest challenges. Most of the bone structure of Vessel was made in Italy and then shipped to the US for assembly. The cost is $150m. 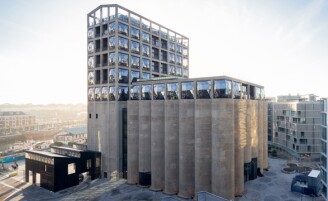 But you cannot put a price on togetherness, according to Heatherwick. As we rely more and more on the digital realm, the real world and its cities have to work harder to engage us. “In the past, a new development would just be a string of shops. But now you can stay in bed and buy what you need to buy,” says Heatherwick. “Why would you go somewhere?”

Heatherwick’s answer is to offer pleasure and the opportunity to see and interact with fellow citizens. He certainly has delivered on this front: last year, a set of previously derelict Victorian warehouses in Kings Cross, London, were redesigned by Heatherwick Studio to become a 100,000-sq-ft, £100m retail and lifestyle destination known as Coal Drops Yard. Before that, the studio designed the Garden Bridge to cross the River Thames, a concept that was aborted in 2017. Work is currently underway on Pier 55, a park space being built in the river in Manhattan.

All of these projects were or are privately funded, each having been subject to criticism for “masquerading” as a public space. Heatherwick – an architect who has designed student residences and is currently working on a cancer care hospice – shrugs this off. “I believe we should celebrate commissioners who attempt to make beauty and specialness,” he says. Urban centres rely on this: “Not everything can shout in a city, but the occasional distinct thing is what humans cherish.”

Indeed, Heatherwick has been something of a poster boy for madcap architecture ever since he set up his studio in 1994, upon graduating from London’s Royal College of Art. He has created a bridge that rolls open, and his B of the Bang was, in 2005, the tallest public sculpture ever constructed in the UK. He was also the man in charge of reviving London’s famous Routemaster bus. It is no wonder the Victoria and Albert Museum’s 2012 retrospective was entitled Heatherwick Studio: Designing the Extraordinary.

His portfolio is united by a sense of play, something he feels architecture today lacks. “I think there is a big opportunity for a deeper understanding of the neuroscience of the emotion of engaging with places,” he says. “Our projects try to think about the physical human response to them.”

Vessel will do this, unashamedly and hyper-physically. Heatherwick describes sweat as a great leveller and hopes people will use Vessel as a place for getting fit. “When did you last walk up 16 storeys with somebody?” he jokes.

Naturally, the mirrored surfaces and myriad viewpoints will also provide plenty of opportunities for visitors to physically respond to Vessel in the only way many of them will know how: through a smartphone. To what extent has the mirrored surface and architectural spectacle been designed with the selfie generation in mind? Heatherwick is dismissive.

“It’s easy to pull things down by the implication that something was made for a photograph. But go back to ancient Egypt when they were making the pyramids,” he says. “Antoni Gaudí had never heard of Instagram.”

Instead, we should focus on the potential that architecture has to lift us up, Heatherwick concludes. “What matters most is what something means to you.”

Tom Morris is a writer and editor based in London.