The History of Rolex Daytona

By Alan Seymour
Charting the greatest moments of Rolex’s fabled history with chronograph wristwatches, The Rolex Daytona Capsule Collection sale , which is open for bidding until 30 May, brings together a selection of 13 exquisite timepieces that span the eight decades of the Oyster Chronograph.

How the Rolex Daytona Became the Hottest Sports Watch

F ollowing a handful of tentative Zenograph/Centregraph monopushers in the late-1930s, the ref. 4500 ‘Pre-Daytona’ represents Rolex’s move into chronograph production in earnest.

Dating to the mid-1940s, the ref. 4500 boasts a conventional 2/4 o’clock pusher configuration and ‘side by side’ sub-dial layout. This particular example also includes bi-metal yellow gold and stainless steel case construction and a tachymeter/telemeter scale.

Given the obvious benefits of the chronograph’s combined wristwatch/stopwatch function, Rolex’s early pieces found popularity with many individuals in professions ranging from medicine to the armed forces and, prolifically, motorsport – including the racing legend Enzo Ferrari.

Evolution of the Rolex Chronograph continued over the next 20 years until, in 1963, the brand launched its first Daytona model. Powered using the hand-wound Valjoux 72 calibre and named after Florida’s Daytona International Speedway, it celebrated Rolex’s official partnering with the racetrack the year before and cemented the connection between Rolex chronographs and motorsport.

The archetypal first generation Daytona features design cues that speak of its racing pedigree, which set it apart from previous Rolex chronographs. These include a steel or acrylic tachymeter scale bezel (for timing average speed) alongside an easily-legible black/white or white/black dial and sub-dial format (particularly useful if the wearer is consulting the watch at speed behind the wheel). Helping ensure water resistance, screw-down pushers were added to the mix in 1965.

It must be said that the Daytona was not an instant success. Initial sales were sluggish and many retailers offered the Daytona at heavily discounted rates to move stagnant stock. However, thanks in no small part to famous wearers like actor-cum-racing driver Paul Newman and the ever-influential network of Italian dealers and customers, the second generation of Daytonas – introduced in 1988 – would quickly become a sell-out hit with a years long waitlist to boot.

The first in the line-up to employ an automatic movement, this new Daytona was driven by a heavily modified El Primero movement from Zenith; one Rolex made approximately 200 changes to. Beyond the movement, the gen’ 2 Daytona utilised scratch-resistant sapphire crystal instead of plexiglass, did away with the acrylic bezel option, increased in size to 40mm, made use of ‘crown guards’, and debuted a contrasting ring design for the sub-dials.

The next serious update came 12 years later with the third generation. For this iteration, Rolex used a completely new in-house movement christened the Calibre 4130. Again self-wound, the new mechanism had a 72-hour power reserve and a more efficient vertical clutch system. In terms of design, Daytona ‘III’ didn’t stray to far from its predecessor with the most significant changes being the move from slender ‘stick’ to broader ‘arrowhead’ shape hour markers and the swapping round of the 6 and 9 o’clock sub-dial readouts. That is until 2016, whereupon Rolex introduced the ref. 116500 with its black ceramic bezel, recalling the look and feel of the now-beloved first generation acrylic bezel Daytonas. 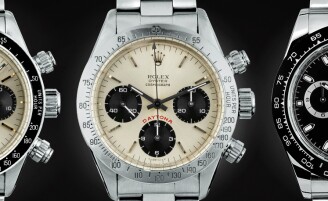