C herubic features alight with mischief and mayhem, Yoshitomo Nara’s protagonists – aptly styled “those big-headed girls” in a recent monograph by Yeewan Koon – have captivated viewers in his native Japan and around the world, earning their creator a devoted cult following. Floating against lonely, monochrome backgrounds, their faces are fixed in sneers, snarls and sighs as chubby fists brandish knives and drumsticks with insurgent bravado. With three major exhibitions now on view, including the first international retrospective of the artist at LACMA (1 April–5 July), a monumental museum show at the Dallas Contemporary (20 March–22 August), and his debut solo presentation in Taiwan at Taipei’s Kuandu Museum of Fine Arts (12 March–20 June), Nara and his solitary heroines are poised to generate more enthusiasm – and intrigue – than ever.

Indeed, while saucer eyes and Kewpie figures might suggest that these are paintings of children, their resonance with adult experience and emotion reveal them to be something more layered: in the words of Mika Yoshitake, who curates the LACMA retrospective, “They’re really all, I think, self-portraits.” Perhaps their uncanniness emerges from the unusual experience of encountering such an intensely felt interior world, writ so plain. The works’ formal simplicity – spare compositions reminiscent of ukiyo-e woodblock prints, occasionally punctuated with brief textual exclamations – exposes, with the disarming sincerity of its youthful subjects, a practice of intensive and unsparing introspection.

Born in 1959 in Aomori Prefecture, Nara grew up in a rural community near the city of Hirosaki. With both parents working busy schedules and a separation of some ten years between himself and his two older brothers, the artist recalls a solitary childhood. He has reflected, “When you are a kid, you are too young to know you are lonely, sad, upset…Now I know I was.” As an adolescent, Nara took refuge in pop culture, finding escape and empowerment through music: a voracious record collector, his unorthodox first exposure to art came courtesy of album covers. The diverse visual cultures of popular music – especially punk, with its scrappy, rebellious spirit – are an unmistakable influence in Nara’s work (his iconic bobble-headed character is sometimes called Ramona, an homage to the seminal New York punk band, the Ramones).

After obtaining degrees at Aichi Prefectural University of the Arts, Nara was accepted to the prestigious Kunstakademie Düsseldorf, and later spent several years living and working in Cologne. His time in Germany was marked by intense loneliness, a condition which he would later credit toward his artistic development: “I needed a setting which would allow me to isolate myself from others to have a real conversation with the inner-me… I found my style only after living in solitude.” It was toward the end of this period that he produced the exceptional Frog Girl (1998): a tender and transfixing image, the painting’s luminous surface and refined visual lexicon mark Nara’s arrival at his mature aesthetic. The work’s subject – her broad face and piercing bean-shaped eyes evoking a dissonant combination of fragility and menace – is a near-perfect mirror image of the glowering heroine in Knife Behind Back (2000), which achieved Nara’s world auction record of US $25 million at Sotheby’s in 2019. While the exaggerated cuteness of Nara’s characters is deceptive (after all, these little girls are smoking cigarettes, setting fires and generally up to no good), their more sinister qualities are likewise loaded with darkly humorous ambiguity. Art historian Kristin Chambers observes that, through his portraits of children, “Nara captures the tension between innocence and experience, physical isolation and mental freedom, containment and independence. [He] embraces the whole of the human condition and recognizes that, in fact, evil is an essential part of innocence.”

The Japanese concept of kawaii is also illuminating: often translated simply as “cuteness,” the word further connotes the pitiable, innocent, miserable, cherished and small. Accordingly, toward his weapon-wielding heroines, Nara has expressed an empathic point of view: “I kind of see these children among other, bigger, bad people all around them, who are holding bigger knives.” The cultural prominence of kawaii is often framed in the context of postwar Japan – a once-bellicose Imperial society, defanged and infantilized in the wake of devastation and demilitarization – struggling to reconcile its past and present. Indeed, Nara has produced a number of works tackling the lingering trauma of nuclear war; however, he largely rejects broad socio-political interpretations. Instead, he asserts, “In my case, it is not about the country or the people or the categories, I am just trying to express individual things.”

As Nara’s thematic preoccupations have matured, the spiritual aspects of his practice have come increasingly to the fore. In Life is Only One! (2008), his long-lashed protagonist rushes blindly into the unknown, with bold red text exhorting viewers to consider the fleetingness of life. Of the enigmatic phrase, Nara explained that “it isn’t about physical mortality, it is about the spirit that never dies.” In 2011, following the devastating Tōhoku earthquake and tsunami, Nara shifted his focus toward an ever more contemplative introspection. The culmination of decades of artistic development, Ten Stars (2014) exemplifies the meticulously layered quality of Nara’s later work. The titular stars – motifs that call forth associations from Eastern and Western traditions – circle the girl’s head like a halo, fairly crackling with magic, while exquisitely applied brushwork on layers of jute add a meditative quality to the child’s impish reverie.

Koon observes: “The challenge [Nara] sets for himself is… to transcend his own ego so that his child figures can independently create connections with their viewers.” Minimally rendered and drawing on Modernism’s sign-like visual shorthand, Nara’s big-headed girls leave endless space for resonance and fantasy. Upon encounter, viewers – whether experts or casual observers, adults or children – are invited to empathize with and relate to their uninhibited expressions of exuberance, rebellion, petulance and tranquility. While his paintings emerge from deep self-examination, Nara admits: “Whether I like it or not, the things I make are no longer self-portraits, but belong to the audience who find themselves, their friends or children they know in my paintings.”

Play to View the Details of Yoshitomo Nara's Works 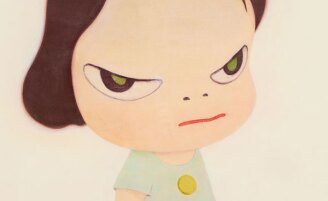