T he excess of Western consumerism is a theme that Banksy has returned to time and time again. Whether it is a powerful leopard emerging from a barcode cage, a small girl being lifted up by the robotic arm of a cash machine or a line of festival-goers queuing up to purchase t-shirts reading “Destroy Capitalism”, Banksy has frequently explored how humanity exists in the grip of mass-market consumer culture.

Of course, Banksy’s commercial success at auction does raise questions about his own complicity in the system he claims to disrupt. In his own words: “Commercial success is a mark of failure for a graffiti artist. We’re not supposed to be embraced in that way.”

This complicated relationship between artist and the art world was never more evident than in October 2018, when, as the hammer fell on the sale of one of his most popular and well-known works, Girl with Balloon, the canvas slid through a shredder hidden in the base of the frame. The work was only partially destroyed and was instead given a new title: Love is in the Bin, which sold for £18,582,000 in October of this year.

Now, one of his most searing critiques of consumerism, Trolley Hunters, is to be sold in Sotheby’s upcoming Now Evening auction. As ever, in Trolley Hunters, Banksy uses his trademark dark humor to lampoon what he considers to be the ills of society. It is a ludicrous scene, depicting three crouching hunters stalking their “prey”. But rather than a buffalo or antelope, their weapons are aimed at a “herd” of shopping trolleys.

Harking back to a time when humans were self-sufficient, the work serves as a biting satire about how dependent humanity has become on mass-produced goods. It highlights our inability to provide for ourselves outside of modern capitalism and how far removed we have become from our base instincts as a species.

Trolley Hunters was part of Banksy’s groundbreaking 2006 Barely Legal exhibition in a Los Angeles warehouse. It was a show that made the anonymous street artist from Bristol a superstar. But despite being created 15 years ago, Trolley Hunters – like much of Banksy’s output – remains eerily prescient.

Our needs today might not be quite the same as those of Neanderthal man, but reliant as we are on capitalist structures, if they should fail to function, we are left as empty-handed as Banksy’s hunters. This has become more evident than ever during the pandemic, when many industries ground to a halt and the knock on effects – broken supply chains, delays and shortages – continue, even as the world begins to recover. As Trolley Hunters comes to auction, we are approaching Black Friday, a time of year entirely predicated on geeing-up of shoppers, urging them to spend, spend, spend in the run-up to Thanksgiving and Christmas.

'Despite all our evolutionary advances over the last 40,000 years, mankind is today reduced back down to his primal instincts: hunter-gatherers picking fights in petrol station forecourts and supermarket aisles to panic buy fuel and toilet-paper that they don’t even need'

Sotheby’s Alex Branczik says: “As the global supply chain has been disrupted and in recent weeks ground to a halt, the fragility of our fast-paced consumerist eco-system has been laid bare. With manufacturing delays, queues at ports, a shortage of hauliers, and the White House pronouncing that some toys will not be on the shelves this Christmas, our erstwhile unfailing belief in consumerist culture is being shaken to its core. Despite all our evolutionary advances over the last 40,000 years, mankind is today reduced back down to his primal instincts: hunter-gatherers picking fights in petrol station forecourts and down supermarket aisles to panic buy fuel and toilet-paper that they don’t even need.”

The imagery of shopping trolleys has appeared in other Banksy works, most notably, his 2005 “re-mixed” oil painting, Show Me The Monet, which sold at Sotheby’s in October 2020 for £7,551,600. In that piece, the artist interrupted Claude Monet’s serene view of the Japanese Bridge by dumping trolleys and a traffic cone into its tranquil waters. But perhaps even more than in 2006, the shopping trolley is no longer just a physical object, but it is has also become an icon - the digital basket that we fill up as we shop online.

In Trolley Hunters, the trolleys are not filled with sustenance – they are empty, suggesting that however much energy these hunters expend on capturing them, there will be little reward or satisfaction. There is a suggestion here that Western consumer culture works to sustain itself and stimulate the economy rather than to actually sustain us as people. Is the dream sold to us by capitalism actually an empty one?

Like all Banksy’s work, Trolley Hunters employs wit and subversion to reframe objects and ideas prevalent in our daily lives, asking us to reconsider them and diversify our thinking. He asks questions but does not necessarily offer answers, acknowledging that these are topics too complex to be resolved in a single work of art. 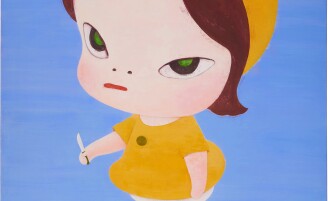